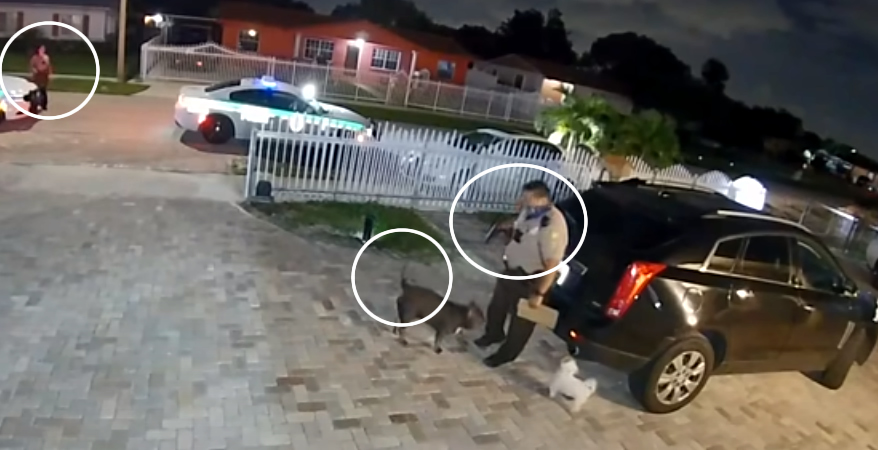 In #Miami: Police kill an innocent 8-month-old puppy with 7 shots, “just because he felt like it”.

In a heinous case of abuse against canines and ruthless police who will surely soon be back on the streets of Miami shooting at innocent canines as can be seen in the video below in which, at no time was the canine aggressive against the element uniformed, even more so the latter repeatedly took out his weapon to aim and later end the life of this innocent canine in front of its owners.

A home surveillance camera caught a Miami-Dade County police officer in Florida shooting multiple times at a domestic dog while responding to a barking complaint call, so the question is this :

Are Miami-Dade police officers trained to respond to barking complaint calls by shooting innocent little animals that greet them without violence?

The event occurred last Wednesday, January 12 around 7 in the afternoon and resulted in the death of the dog, an 8-month-old puppy of the American Bully breed, local media reported in the respective city.

It is important to emphasize the fact that this policeman is ruthlessly ignorant about canine breeds, since the American Bully breed has the characteristic of being docile, as can be seen below:

Evidence of the sadistic and ruthless behavior of the alleged “police”, everything was recorded.

The camera recorded the officer standing in the patio of the house, at which time two dogs, a white Maltese and a black American Bully, came out of the house and approached the agent barking but without showing an aggressive attitude.

The police officer pulled his gun from him and pointed it at them as he repeatedly asked the owners to hold the American Bully. The pets then began to run towards another agent who was in the street, after which the puppy went back to the first officer, who then fired seven shots at the animal.

County Police are conducting an internal investigation into what happened.

“This incident should not have happened if the police had been properly trained. We need to do everything we can to better protect our four-legged family members. This 8-month-old pup, Alpha, was not aggressive and did not deserve to die like this.” “, communicated from the Miami Coalition against the Specific Legislation of Races.

“No police officer should use deadly force unless absolutely necessary. When an officer has alternative non-deadly means at his disposal, these are the ones that should be used before drawing the weapon,” said Gregory Moore, the attorney retained by pet owners.

Here is the evidence video:

ANALYSIS OF THE VIDEO: THE POLICEMAN DRAWS HIS GUN EVEN WHEN THE DOG RECEIVES IT WITHOUT VIOLENCE AND MOVING “THE TAIL” FOR ALL THOSE WHO KNOW THE CANINE LANGUAGE, WAVING THE TAIL MEANS IN THE BODY LANGUAGE OF THE CANINE, THAT HE IS CALM AND NOT HE IS AGGRESSIVE, ANOTHER POLICEMAN SEES HOW THE FIRST POINTS OUT THE INNOCENT DOG AND SAYS NOTHING, SO IT IS SUPPOSED THAT HIS POLICE TRAINING INCLUDES THIS TYPE OF PERFORMANCE.

In #Miami: Police kill an innocent 8-month-old puppy with 7 shots, “just because he felt like it” was last modified: April 11th, 2022 by NotiActualCom

This is the real reason for Sylvester Stallone’s divorce after 25 years of marriage.