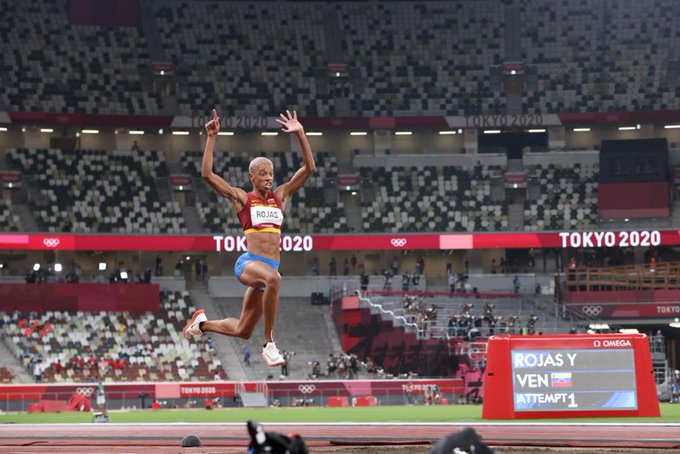 Yulimar Rojas with a single jump qualifies in 1st place in the final of the triple jump in Tokyo 2020.

In one of the most difficult disciplines of athletics, since it requires high preparation and performance, impeccable timing and a lot of strength in the legs, the Venezuelan Yulimar Rojas with a single attempt, achieved the necessary mark to go directly to the final through the Gold medal of the triple jump of the Olympic Games Tokyo 2020.

The final will be played next Sunday, August 1 at 7:15 am, Venezuelan time, at the Olympic Stadium in the capital of Japan. Yulimar Rojas achieved a distance of 14.77 meters, jumping 39.8 centimeters behind the plasticine, to stay with the classification, Meridiano reported.

The Venezuelan, double world triple jump champion, was seconded in the group “A” qualifying event by the Spanish Ana Peleteiro, with a maraca of 14.62, with no more classified. The qualifying mark was 14.40 meters, so that the disciple of Cuban Iván Pedroso did not need to continue competing.

On the other hand, in group “B” the athletes Thea LaFond, from Dominica, with a mark of 14.60 and the Portuguese Patricia Mamona, with a jump of 14.54 classified.

In third place was the Cuban Liadagmis Povea, with a record of 14.50, and the fourth classified was the Jamaican Shanieka Ricketts, with 14.43.

With just one try! Yulimar Rojas qualifies in 1st place in the final of the triple jump in Tokyo 2020, VIDEO was last modified: August 2nd, 2021 by NotiActualCom

Table of Medals of the Olympic Games Tokyo 2020