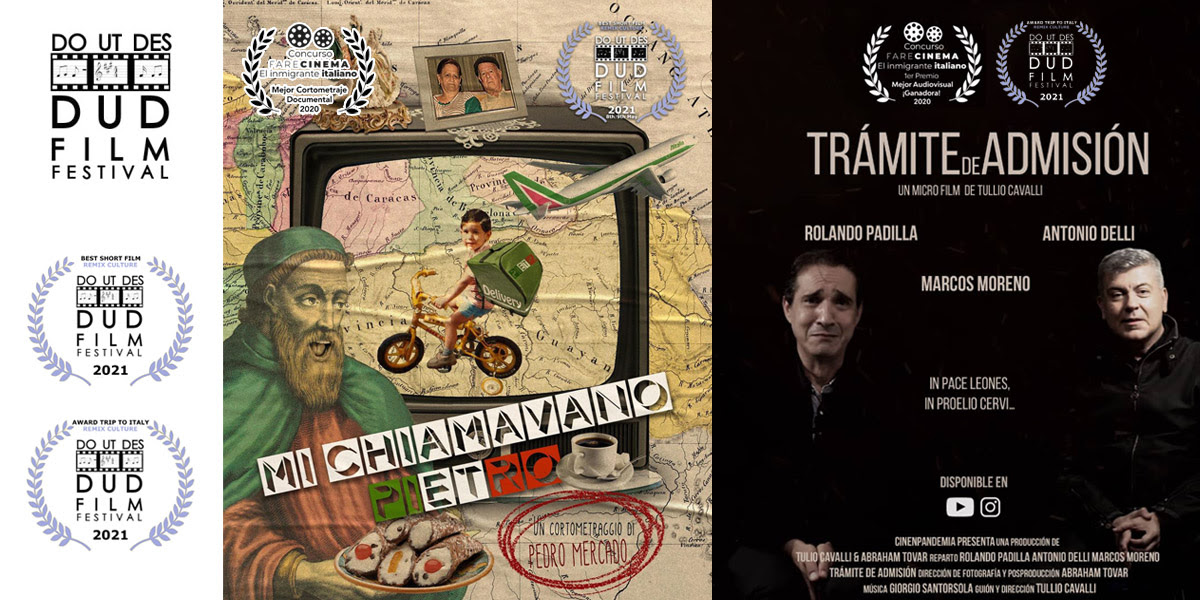 Both productions were premiered last December and obtained the first places in the audiovisual contest “Fare Cinema, The Italian immigrant”, organized by the Embassy of Italy in Venezuela together with other organizations

Caracas.- Two national film productions have raised the international recognition of Venezuelan cinema by winning awards at the Do Ut Des Film Festival, held between March and May, in the Tuscany region, Italy. The audiovisuals Me called Pietro, by the director Pedro Mercado, and the fiction short film Trámite de Admission, by Tullio Cavalli and Abraham Tovar, won the Remix Culture section, winning the Best Short Film and the Trip to Italy Award (Trip to Italy). Award), respectively.

Both productions were premiered last December, when they surprised the jury and obtained the first places in the audiovisual contest “Fare Cinema, The Italian immigrant”, organized by the Embassy of Italy in Venezuela and the Italian Institute of Culture of Caracas (IIC), with the sponsorship of the InterComItEs Venezuela, the Venezuelan – Italian Chamber of Commerce (Cavenit), the Società Dante Alighieri and the Trasnocho Cultural.

At the Do Ut Des Film Festival, Pedro Mercado’s work won in the Remix Culture: Italy-Venezuela section, dedicated precisely to the cultural exchange between directors about the Latin American country. On this occasion, the jury valued the audiovisual “the originality of the tone, the brilliance of the story and the fluidity of the rhythm; in addition to the ability to authentically reflect the welcoming atmosphere that the Venezuelan people have reserved for Italians over the years and the perfect integration between the two peoples ”.

According to the verdict, “the short narrates, in a non-trivial way, childhood in a country that has always been multicultural, but that for some years now runs the risk of disappearing in its truest and most genuine essence.”

Director Pedro Mercado believes that “the public appreciates the honesty and simplicity” of Me called Pietro, for telling a “very intimate story that ends up having an important nostalgic charge. It is a work that has no aesthetic, narrative, or political pretense. It’s just me, remembering my childhood and how happy I was surrounded by the immigrant community, mostly Italians, in contrast to my current life, in a society and a country that has changed, in addition to a pandemic ”.

Mercado was in charge of the script, production, direction, camera and editing of the documentary. In mixing the sound and the design of the soundtrack, he had the collaboration of Antonio Garrido, and the original music of Caribano.

The festival jury also decided to award the short fiction made by Tullio Cavalli and Abraham Tovar, entitled Admission Procedure, with the Trip to Italy Award for its ability “to transmit in a simple and direct way, that mixed feeling of nostalgia and typical dignity of the children of immigrants, whose identity is eternally divided between the roots of the past and the coexistence with the present, being in this case even more complex due to a dramatic and hypothetical political scenario that does not seem so far from the present of many South American countries ”.

According to Tullio Cavalli, “the rejection and marginalization of the individual, what we see in the Admission Process, could happen to anyone and the nostalgia that is described is a terrible overweight in the burden of any human being who has to leave his country for reasons of force majeure ”.

This short presents a “retrofuturist” vision, in a hypothetical conflict scenario, from the perspective of two dejected men who review the original values ​​of Italianness in difficult times and are threatened by a present about to disappear, the synopsis points out.

The audiovisual is notable for the performances by Rolando Padilla, Antonio Delli and Marcos Moreno, produced by Tullio Cavalli and Abraham Tovar, the photography and post-production direction by Abraham Tovar, and the music by Giorgio Santorsola.

Regarding the recognitions that this work has received, Cavalli maintains that they are the result of the sustained work that he has developed in the artistic scene and that he has done without the pretense of achieving success. “Although I do confess that when I undertake a project I do it by focusing on the possibility of achieving it,” he said.

For having won in the Remix Culture section of the Do Ut Des Film Festival, the Venezuelan shorts will be distributed throughout the Italian territory for one year. Likewise, the documentary They called Me Prieto and the short Admission Procedure will continue their journey in the next few months in other film exhibitions. For now, both productions will be in the month of July at the Venezuelan Film Festival.

To enjoy these audiovisuals, interested persons can connect to the YouTube channel of the Istituto Italiano di Cultura di Caracas, where all the shorts that were winners in the first edition of “Fare Cinema” are available.

Pedro Mercado Hidalgo, They called me Pietro awarded as Best Short Film at the Do Ut Des Film Festival, in the Remix Culture section: Italy-Venezuela