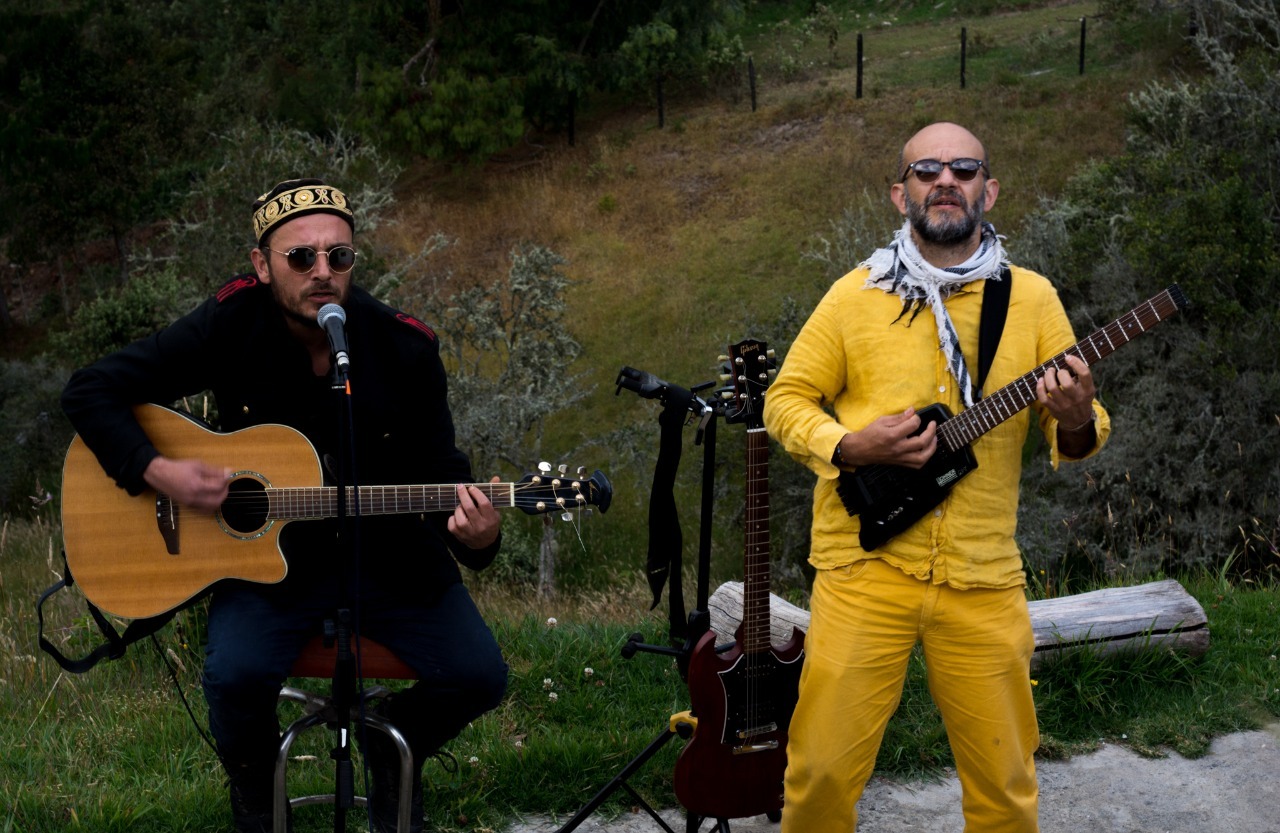 The songs of Del Mar La Espuma decant through enigmatic and emotional lyrics, full of images and metaphors of nature that speak of existing from love and freedom.

Her proposal runs through reflections on social issues, environmental activism and the mystical experience.
Del Mar la Espuma (DMLE) is a Colombian indie rock musical project that emerged at the end of 2015 at the initiative of Mauricio Rojas, singer, musician and composer. The project, which has had various phases and collaborative meetings, is currently a proposal in duo format, accompanied by Juan Pablo Bedoya, musician, arranger and producer.

The message of the songs of Del Mar La Espuma travel through enigmatic and emotional lyrics, full of images and metaphors of nature that speak of existing from love and freedom from the immensity of what seems unknown in the face of superficial sounds that silence at times the voice, messages that range from the romantic and sensual, which flow into reflections on social issues, environmental activism and the mystical experience.

“We want to be a benchmark for indie rock in Spanish and go deeper and deeper into the generation of sensory experiences that immerse our audience in an emotional, conscientious and beautiful world, in addition, that connect with nature through a wave of fresh sounds and deep atmospheres”, says Mauricio.

‘Minga por la paz’ ​​is his new release, a contribution from Del Mar La Espuma from music to peace and a tribute to the victims of the armed conflict in Colombia. The song is part of a contribution to the memory of the disappeared and the struggles of their families. The song is set with sound elements and musical arrangements mainly from Andean folklore, maintaining its already recognized electro rock format. ‘Minga por la Paz’ will be part of the EP ‘New Dawn’.
“I wrote the song while working on the investigation of cases of Forced Disappearance in Magdalena Medio and Comuna 13 in Medellín, situations that deeply moved me due to the horrors of war and that were reflected in ‘Minga por la paz’ ​​to make visible the reality that so many Colombians have lived anonymously. It also has a thread of hope so that these circumstances do not repeat themselves. It is very gratifying to have the participation of my father Alpher Rojas, a writer and human rights defender, who contributed some paragraphs from his pen to this song and this tribute”, emphasizes Rojas.

The video of the song is a live session where a proposal of counterpoint to two cameras with variations of color and black and white that seeks to infect the audience with the strength of the interpretation of the project is evidenced.

“The message of the song is to pay tribute to the memories of the victims of the armed conflict in Colombia and an invitation to walk together to face and heal the pain of this tragedy that crosses the spirit of our country,” says Mauricio Rojas.

Another of his singles is ‘Eljuego del Ángel’, a heroic song of someone who rises from the ashes and who, from his strength, stands as an angel that surrounds a city in chaos.

According to Mauricio, “the inspiration for this song arose when one of my great references, Gustavo Cerati, fell into a coma, a situation that moved me a lot. At that moment my lyrics found a synchrony with the words of the master Luis Alberto Spinetta dedicated to Cerati – who represented him as an angel – this coupled with that epic image of The City of Fury. To the above, was added the reading of the adventure novel The Angel Game by the Spanish writer Carlos Ruiz Zafón, thus conforming the elements that constitute the message of the song”.

The format of ‘Eljuego del Ángel’ is alternative rock within the framework of which DMLE explores different sound textures with guitar melodies, synthesizers and choirs.

The lyric video is a visual experiment in which fast and slow motion variations intermingle as a backdrop to the song’s lyrics. The concept and realization of this audiovisual work is the result of the collaboration between Del Mar la Espuma and the audiovisual producer Videocrata.

The music of Del Mar La Espuma is suitable to feel expansion and tranquility, to get out of moods of sadness or darkness and to deepen states of equanimity, lightness and freedom.

“Our proposal allows us to expand and experience sound, dream and sensory worlds that make us go through states of mind that, in the midst of difficult life situations, chaos, and violence, lead us to catharsis, elevation and consciousness” , concludes Del Mar La Espuma.

“Bailando” is the musical invitation of La Cassandra