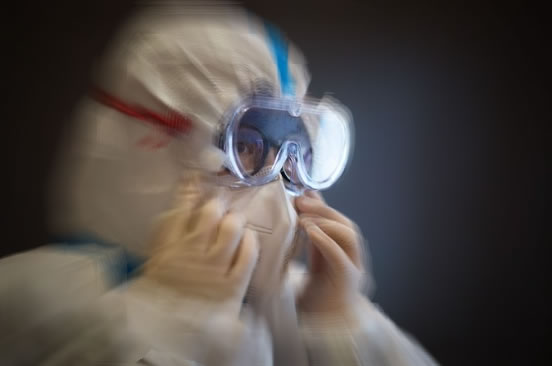 Chinese epidemiologist says that the incubation period of the coronavirus is 24 days in which the disease can be transmitted.

The incubation period of the coronavirus can be up to 24 days, and not 14 as previously thought, according to a study by 37 researchers from hospitals and Chinese medical schools, including the renowned epidemiologist Zhong Nanshan.

The findings of the latest draft of the investigation were reported Tuesday, which shows that fever – until now considered one of the first symptoms – manifested in 43.8% of patients at the time of their first visit to the doctor, although it ended up developing in 87.9% after his hospital admission.
Ads by

“The absence of fever,” the text explains, “is more frequent (among patients studied) than with acute and severe respiratory syndrome (SARS) and the Middle East respiratory syndrome (MERS), so it may not be diagnose these patients if surveillance to determine cases focuses primarily on the detection of fever. ”

The same happens with the tomography scanner tests, which only detected symptoms of a possible infection in half of the cases analyzed, but, b “given the growing concern that nucleic acid tests are giving many false negatives, some doctors proposed the inclusion of tomography scanners for the diagnostic process. ”

The sample was carried out on 1,099 patients with a coronavirus infection diagnosed until January 29 in 552 hospitals in 31 regions of China, with a mean age of 47 years and of which 41.9% were women.

Among the patients – 26% had not traveled to Wuhan, the epicenter of the epidemic, or had been in contact with people there recently – the average incubation period for the virus was three days and not 5.2, as it had been concluded in previous investigations, although the cases studied indicate some incubation of up to 24 days.

The study also shows that the coronavirus “has a relatively lower lethality rate than SARS and MERS,” as noted in a recent interview with correspondents based in China the prestigious epidemiologist Ian Lipkin, director of the Infection and Immunity Center for The American University of Columbia and in charge of the SARS response team in China in 2002 and 2003.

“There is an approximate mortality of 2% (of the patients infected with coronavirus). The SARS had a mortality rate of almost 10%, while that of the MERS was around 35%,” Lipkin said.

“When you compare it with the flu,” the epidemiologist continued, “of which there are up to 1 billion cases a year worldwide, with between 350,000 and 650,000 deaths, although it is a mortality rate of 0.1%, it is a much larger number. “

Chinese epidemiologist says that the incubation period of the coronavirus is 24 days in which the disease can be transmitted was last modified: August 2nd, 2021 by NotiActualCom